What was that? Cursing in Spanish again?

What exactly is a BSD?  You would ask if you cared, but the pedant in me forces me to explain it anyway.

It stands for Berkeley Software Development – as in the University of Southern California.   The free part was added later – to make the name “FreeBSD”.  This is in spite of the fact that UC Berkeley is no longer free.  About twenty  five years ago, the school was involved with the distribution of  AT&T Unix.  Seems that AT&T thought they were too liberal with what they were distributing via some agreement between the parties.  So, some chaps at UC Berkeley decided to make their own version – first called BSD and then some other chaps (not at UC Berkeley) decided to make yet another version called FreeBSD.  AT&T wasn’t all that happy with the arrangement, and made it clear that these “derivative” operating systems could not claim to be “hatched” from mother Unix. Derivative is in quotes, because the code had to be rewritten to satisfy AT&T.  Details related to the settlement reached after the lawsuit were not made public. In BSD circles we cannot say the “U” word.

So, other than for making people think we are cursing, what’s a BSD good for?

FreeBSD is different than Windows.  On FreeBSD, you have to “build” many of the applications you use.   This sounds difficult, but thanks to source code repositories for applications like Firefox, it’s mostly automatic.  The computer grinds away for an hour or two while the user (me) writes memos that one in ten thousand people care about.  I think it’s about half way through its grinding process.  The whine of the hard drive has slowed down a bit.  For Firefox 9, it has to grind through seventy megabytes of source code.  I remember when it was three.  It makes me wonder what all that extra stuff is.

Recently I took it upon myself to put an interest graphic on the top of all or most of my posts. If the reader doesn’t like what I say, maybe they’ll like my doodles. Well, I wasn’t sure what to put on the top of this article. I thought about the FreeBSD mascot – but I didn’t know how kosher that would be with the foundation. So – I doodled around in Inkscape. Did I say – it’s addictive? It’s addictive! Anyway, I came up with the strange thing at the top of this page. What is it?

I’m going to do an article on Inkscape – I think. It’s an amazing tool. I’ve been using GIMP for years, but Inkscape has recently edged GIMP out for graphics. Sometimes I do the touch-up in GIMP. The deal is this. With Inkscape, you design in 3D. Inside of it, you can do 3D or 2D. Its vector graphics. Then, you output to a regular PNG image, since rendering SVG directly in the browser is still a little slow. Eventually, the browser makers will figure that out … 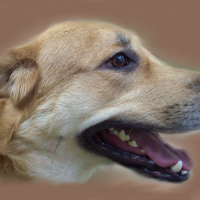