There is the old saying that rust never sleeps.  Well, light never stops.  In the atomist’s viewpoint of the world, there is not really a pat answer for why light ceaselessly moves.  But, to an aetherist, it’s a simple thing to understand.  To the aetherist, all the universe is a 3D fabric of aether, with elastic movements within it.  These movements started with the big bang, and continue to this day.  All that ever happens is that the elastic bumps within the aether medium shift around from one place to another.  They are always conserved, and the total universe is always in equilibrium.

The movements of light in the aether are thumps on the structure of the aether, and once those momentum movements have been instigated by a shove on a granule of the aether (a “granule” is what J. Yee calls the smallest elemental piece of the aether fabric) – then there is a corresponding movement (really a momentum transfer) to the other side of the granule.  The movements are not continuous movements, but instead a bump-bump-bump type of transfer.

When two opposing bumps collide, there is a bigger deformation of a single granule, but all of the energy of that collision is released back onto adjacent granules, because the aether absorbs nothing in the collision that it does not immediately release in the same form.  It is perfectly elastic.  Such an elastic return of the condition of the mesh will happen unless the first bump is immediately followed by a second bump, so the bigger deformations that are seen are a kind of slight of hand.  The light keeps moving.

This is different than is the case with matter, where the collisions are not perfectly elastic.  Matter can keep its deformations, and matter can stop (at least relativistically).

The light (which is a bump/ which is energy/ which is momentum) never stops.  If light were ever to stop, it would not be elastically deforming the aether, and so the bump that is the representation of light would not any longer exist.  The light would disappear from the universe.  That doesn’t happen, because the energy (of the pseudo-movement of the transfer of momentum) is always conserved.  It just goes somewhere else, instead of disappearing.  This is because the aether itself absorbs no energy that is not immediately released again. 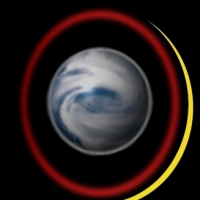